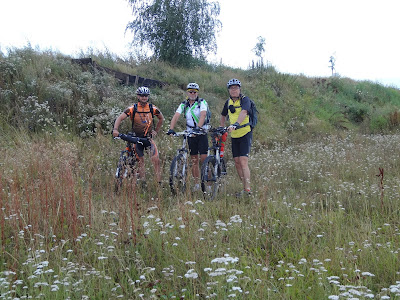 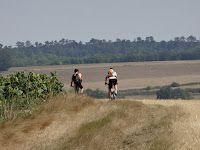 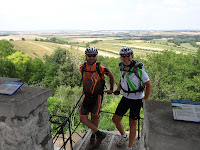 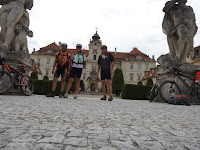 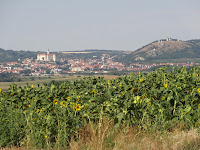 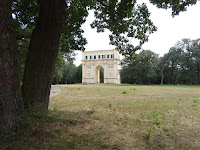 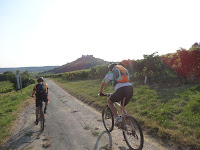 Lower Austria#s Weinviertel isn't actually the heart of mountain-biking, but then what do you need but a lot of dirt tracks and hills and an idea where to ride to.
having said this some 3 years ago I thought up three routes across the Weinviertel each covering a distance of about 160km. Having explored and ridden the three I thought of combining the three for a really long endurance biking route of 480 km, the Weinviertel Trail Race/Challenge was born. I tried it 2011 (300km, DNF), 2012 (200km, DNF) and again this year.
The riders: Christian (45, from Ernstbrunn, serious and dedicated, planned to see us through Day1); Equo (61, RC Pro Widerstand, veteran of some extreme MTB races including the TransAlpChallenge); Bernd (59, veteran MTB-rider and mastermind behind mastertrails.at, member of Free-Eagle.at)
Here's the story:

DAY 1: SAT 10/08/2013 06:20 Equo, Christian and me showed up at the start and off we rode into the morning sun. Throughout the night ther had been thunderstorms which ruined the perfect trail conditions into thick and heavy dirt - so rather unappreciable riding. But it turned into a perfect day after a short while with the sun. Left the wind as a spoiler, as it blew as a true headwind. nevertheless we blitzed though the trails up to Valtice and Lednice in neighbouring Moravia with some rare technicals; broken saddle, sliced tire. On reversing the orientation from North to South in Mikulov we made it via Falkenstein to Mistelbach (10hrs of net riding; 160 km; 1660 altitude metres) with the last evening light. Food and drinks at the "Harlekin" (recommended) - the effect was another push forward out of pure, newly aquired energy: night ride on single tracks to the top of the Buschberg (another 1.5 hrs and 340 altitudemetres). Under a perfect midnight sky some restful hours of sleep on a hard gravel surface. 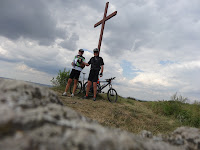 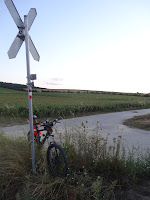 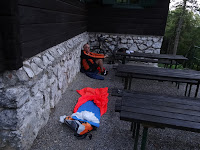 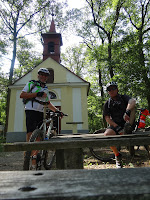 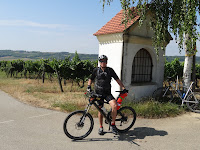 DAY 2: SUN 11/08/2013 06:00 A swig from the water bottle and off we rode via Oberleiserberg through extensive oakwoods to Hollabrunn for a Ham&Eggs breakfast at McDonald's. Passing through Kleinmariadreieichen we took a delicious trail down south to Großweikersdorf and further on to Kirchberg am Wagram. Iced coffee in the summer midday heat, best treat ever. Next stop on top of the Michelberg. This meant long flat kilometers with a final serious climb. We passed by a number of possible feeding stops, which later made me pay dearly. But for that period we continued our relatively fast travail. 6 hours after the midday coffee I bonged - ran out of fuel needed some solid stuff apart from PowerGels. First inn we passed by didn't serve meals as it was 5 min before closing time. Only an hour later we were able to get hold of some hotdogs. After some more riding on perfect single tracks we hit Mistelbach again, obviously from the opposite direction. Pizza and drinks and then we hit the sleeping bag on the threshold of the small church Maria Rast which sheltered us from the morning dew. (10:10 hrs net riding; 1600 altitude metres; 162 km) 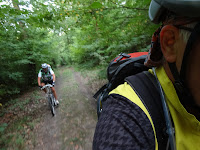 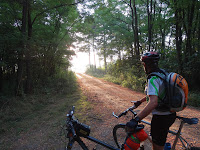 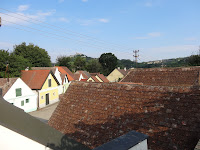 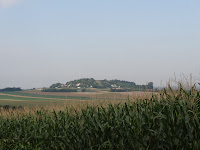 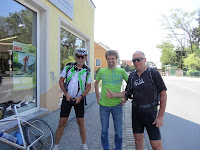 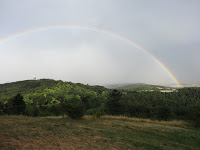 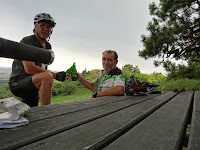 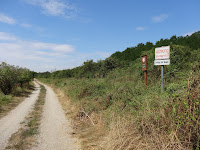 DAY 3: MON 12/082013 05:45 Equo can't sleep long in the morning, so when he finally asked me if I were awake too, I woke up and 30 minutes later we were on an hour of again delicious single track riding to Paysdorf where we wanted to have breakfast. The single track actually traverses some miles of stinging nettles, rasberry and blackberry twines - they make you feel your progress. From Poysdorf to Falkenstein is another highlight of trails. Then we branched off to the west to reach Laa via the wine cellars of Wildendürrenbach. Laa is special because there our dealer for our endorphine machines - the MTB-bikes - has his shop. We dropped in, chatted some and were on our way through the seemingly endless ranges of flat dune hills covered with vineyards and pumpkin and corn fields. Climbing over Buchberg to the lovely village of Mailberg, where we filled up on some sparkling drink, we pushed on to Pathmannsdorf and further on to the Buschberg. So far so dry, but for the last hour the weather cooled us down with 20 Minutes of all-out rain and consequently soft and muddy trails. Finally we crossed the finishing line at the dirtpark in Großrußbach at 19:10 hrs, where it had all begun 60:50 hours ago. 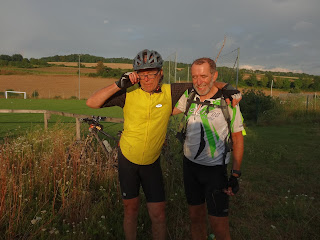