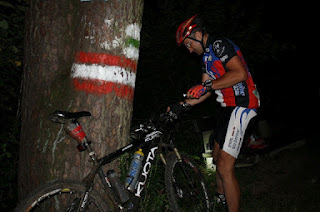 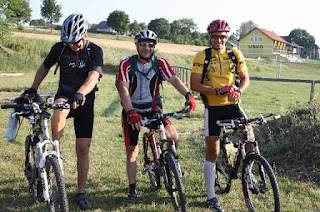 What happened to the 2? Well, Christian and me, we started into this really hot day with a nice pace of som 14+ km/h without too much of a sweat. Some time in the afternoon we passed through Mikulov and later lost the trail - stupid mistake which caused some half an hour of backtracking. Anyway that's when thunder, lightning, pouring rain and hail smashed right down on us - soaking wet and a little beaten we reached Falkenstein, could restore faith in a wine cellar with food. When it grew dark, we left for Poysdorf-Mistelbach and Buschberg, where we wanted to stop for the night. But that ride brought up two cases of serious saddle soreness. Next morning we continued to the Buschberg where we called it quits - assuming that one can't ride another 200+ kilometers standing.
Tough, but a fact. The ride is currently too hard for my butt. But then it will cause some innovations - a new saddle, new bibs (Assos) and better grease for the skin.
Next time - it's going to be an ITT!
For all interested: there will be a revised set of  maps, as some obstacles (fences) need to be avoided.
Long live the CHAMPION!!!
Eingestellt von OStR um 00:31